Letter from Afonso I of Kongo to Manuel I of Portugal Regarding the Burning of the ‘Great House of Idols’.

Sammy Baloji (1978) was born and raised in Lubumbashi, DRC, and lives and works between Brussels (Belgium) and his hometown. He studied computer and information science and communication at the University of Lubumbashi, and continued with photography and video at Ecole Supérieure des Arts Décoratifs, in Strasbourg. A visual artist and a photographer, Baloji has been exploring the memory and history of the Democratic Republic of Congo. His work is a perpetual investigation into the cultural, architectural, and industrial heritage of the Katanga region, as well as an inquiry into the effects of Belgian colonization. His most recent solo shows include Sammy Baloji, Other Tales, Lund Konsthall and Aarhus Kunsthal (2020); Congo, Fragments d’une histoire, Le Point du Jour, Cherbourg (2019); A Blueprint for Toads and Snakes, Framer Framed, Amsterdam (2018); Urban Now: City Life in Congo, Sammy Baloji and Filip de Boeck, The Power Plant, Toronto, and WIELS, Brussels (2016-2017).

Afonso I (1456-1543) was the second Christian monarch of the Kongo kingdom. Probably born in the seventh century and at its peak in the fifteenth, this immense kingdom would correspond today, along the Atlantic coast, to the north of Angola, to almost the entire Republic of Congo, to the west of the Democratic Republic of Congo and to part of Gabon; to the east, it extended from the Atlantic Ocean to the west of the Kwango River and, to the south, from the Congo River to the Loge River. It was during the reign of Manuel I (1469-1521) that Portuguese expansion towards the Americas and the Indies began. In the 1480s, the first commercial and first commercial and diplomatic relations with the Kongo kingdom.

In 1509, the advent of Afonso I sealed an alliance with with Manuel I, in the name of the propagation of the Christian faith. This agreement, where each monarch finds his interest, is very quickly enamelled of conflicts with the Portuguese present in the Congo. 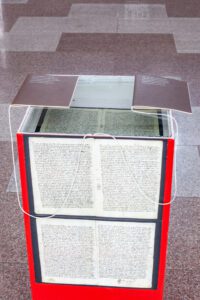 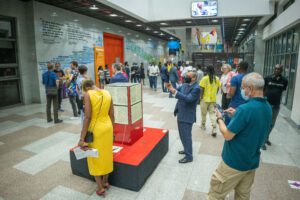 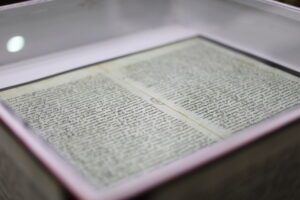